How you all doing? Still crazy, right? Right. I told you about the B&W TP. I was serious. Here are the updates this week:

The young ones are still giggling, and the guy has taken to having calls on the back deck in the evening while I am also trying to be out on the deck and focus on objects in the distance, so I don’t go blind focusing on a screen 2 feet in front of me for 12 hours a day.  Some calls are social, and some seem to be “very important” work calls. Look, little dude. I don’t really care who you are talking to or why, but, no. I know people your age have noise canceling headphones for gaming, so put them on your girlfriend and get your ass inside while you alternately guffaw and talk synergy speak.

They are so annoying, so on Friday, I did what any self-respecting quarantined grown up would do, and I complained to my friends during a Houseparty app call. They worried the kids heard me — it’s true we have thin walls, but I can never hear their actual words, so suck it. If they actually heard me, good. The awkward will be worth it if they shut their pie holes. Otherwise, best case scenario is that my old lady cackling and screeching indignant voice was annoying to them.

Second update is that I am getting more followers and not only that, they are reading my old blogs. One or two was funny, but now it’s just alarming. If that is an indicator of how deep we are in Coronavirus hell, then people, we are screwed. I’m flattered and all but I know people also do things like puzzles, baking (what is with those empty flour shelves) and macrame. OK they aren’t actually doing that — it’s a hippy thing from the 70s. Try it! You will be so cool retro!

So on the new list of annoying things, this one is more edging on paranoia, but hear me out.

Have you all noticed how many robins there are? And that they don’t seem in the least bit afraid of people? Now I’ve noticed that many city animals seem to be running amuck in the streets, but for the most part they just look like teenagers getting away with something. But the robins? Something ain’t right with those birds.

Have you noticed they have a gleam in their eye, like “finders keepers” as they sit on a fence post. I walk by and they don’t even flinch. They STARE. 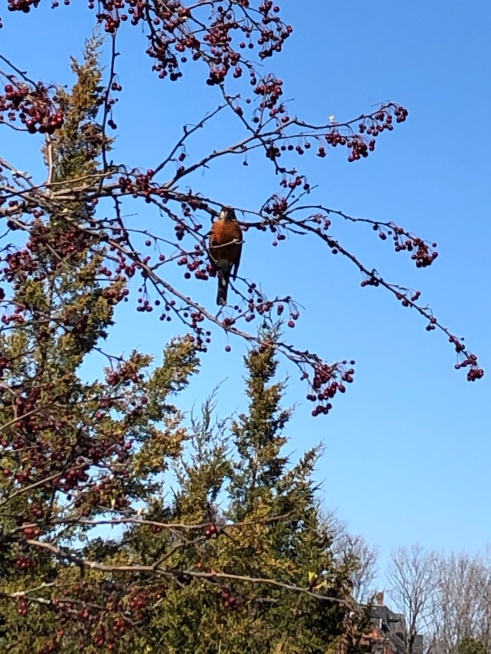 I know Hitchcock had a thing for crows, but I’m telling you it’s the robins. All these years they have cultivated this image that they are the harbingers of spring. All the while they have been waiting for this very moment when humans stop ruling the world. You think I’m making stuff up?

On a recent walk, I sat on a bench and was just staring up in the sky. Then I looked down and saw this one, a few feet from me, watching me with his cold, dark eyes. 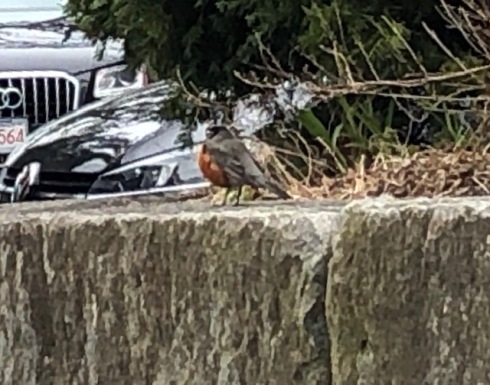 What robins do that? On another walk I saw like 8 robins on the grass. I’ve never seen so many at once. You always see them alone, right? And not one was pulling a worm from the ground. They were watching the people on the sidewalk with their beady eyes. They looked like they were waiting for a weakling to peck out the victims eyes. I started noticing the other birds. They are all just doing their bird things, maybe just singing more. And have you ever noticed how big robins are compared to most birds, like a chickadee? Call me paranoid, but you take a closer look at those “harbingers of spring” and tell me what you see. I’m telling you, those birds are plotting something. Those robins ain’t right.

On a happier note, I was down to my last 1/2 roll of paper towels when I went shopping this weekend. I really didn’t expect to find any and already had a plan of gathering rags to use. But then I turned in the paper aisle, and there it was, like a mirage. One lonely last 6-pack of Brawny paper towels on a vast, very empty shelf. One! I approached it cautiously, like, what’s wrong with it? I looked left, looked right, looked behind. No one else was there to claim it. I put it in my cart absurdly triumphant. If this is what winning looks like, I don’t have tell you how far we’ve fallen, friends.

And BTW can we get a shout out for the grocery and pharmacy store workers? They are doing work as important as hospital workers with a fraction of the recognition. I wish and hope there will be donations gathered for them.

Tune in next week when I try to decide, do I want to have wine delivered again and risk having the same guy three weeks in a row and he’s nice, but told me I should drink more tea?

Hang in there folks.