Going to new places doesn’t get me nearly excited as redisovering places right where I live. I guess in that sense, not remembering is a benefit. And I don’t have to spend a lot of time and money getting to a place, or learn phrases in another language like, “Where is the bathroom?” or “Keep the wine coming, please.”

This summer’s discovery was a two-fer. An advertisement for taking a ferry to the Harbor Islands was the first rediscovery. I think the last time I went was BK (before kid). It was a trip with girlfriends in lieu of a bridal shower for one of them. We packed a picnic, snuck in alcohol, and had a great day. That’s the thing with so many Boston things to do. I did them early on when friends and family came to visit. And I redid a subgroup of activities when the kid came along, but that was more like going to the Aquarium than sneaking alcohol on a trip to the Harbor Islands. And then I forgot about them as family and work life took over. I did take a number of Boston Harbor cruises in the interim, especially for a number of birthdays. But I forgot about the islands.

I did occasionally see articles about camping and staying in a yurt, which seems cool, but I didn’t know anyone who liked to camp. Then this summer I came across a list of Harbor Island events, including an evening cruise to what I consider the newest island, Spectacle Island. The event was sponsored by a brewery. Yay! Ocean, boat, picnic,  alcohol, sunset!

A friend and I went, and it was every bit as wonderful as I thought it would be. Waiting in line to board gave me the opportunity to watch all the people, boats and gloriousness that is Boston waterfront in the summer. The rest was even better — after the 30 minute cruise, we picnicked on the grass, walked to the top of the island to watch the sun set behind Boston, marveled at the changing tall building landscape, and we even roasted marshmallows on a wood fire.

As I was sitting there, rediscovery number 2 seeped into my memory . The Big Dig, dirt, and an island that wasn’t always accessible by the public and didn’t always look like this green harbor jewel: 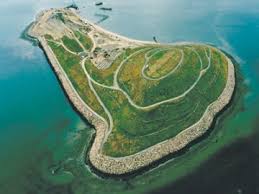 Nope. After a brief early (think 1700s) use as a resort, it housed a factory where Boston’s dead horses were “rendered” into leather and glue and who knows what else. Then came a trash incinerator, and after that closed in the 1930s, the island simply became a dumping ground for Boston trash right through to the 60s. Accounts say it smelled really bad, and there were occasional trash fires that would glow against the Boston night sky.

How spectacular is an island of trash? How can you not root for this underdog? When I arrived in 1983, I didn’t know anything about the island or the smell, even after taking ferry rides to the more civilized islands with fancy histories like George’s Island. Of course it’s easy to like an island that has a Civil-War era Fort Warren, a legend/ghost of the Lady in Black, and stories of captured enemy soldiers. Show off. They kept the public well away from Spectacle.

But then the Big Dig came along. For those of you who weren’t born yet or didn’t have the privilege of living through it, it was, some would say, a Quixotic public infrastructure project that took several miles of elevated highway cutting right through Boston (thanks ugly urban renewal 1950s!) and put it underground. It was the biggest, most challenging public works project of its time. Did I mention it cost billions of dollars, involved a cable-stayed bridge and two tunnels that had to go under a body of water and the subway? It started in 1991 and finished in 2007. It impacted all of us Bostonians, but I loved the impossibility of it. Sure I grumbled when the tunnel work was near my office, and I’d come in with bits of slurry wall or specks of god knows what on my clothes. And the traffic patterns changed on a daily basis.

But the Big Dig had me at “neighborhood mitigation grants” in the early 90s. I worked as an admin for a social service agency in the North End that would be in the thick of the construction. I had no idea really what the mitigation was for, and at that time it just sounded like a lot of idle talk –putting a highway underground. Crazy!  But soon I became a huge Big Dig fan nerd. That’s when I learned about Spectacle Island. Where are you going to put 4 million cubic feet of dirt that you are digging out for an 8-lane tunnel under a city? How about you use it to cover up 30 years of trash and horse remains with two feet of clay and 2 to 5 feet of topsoil?

George’s Island eat your heart out.

I remember wanting to go see the big heap of trash and dirt, but you couldn’t unless you had your own boat. Instead I read articles and followed the progress like it was my favorite sports team. Finally the project came to a close and the next 5-10 years were all about getting the money to actually create a park along the elevated highway scar that the public would want to go to and add a smaller, closer island to a national treasure of Harbor Islands.

Spectacle Island opened in 2006, and I am sorry it took me so long to go see it. But I remember now. Well, at least until I get busy and forget again. I think I have at least one more summer. 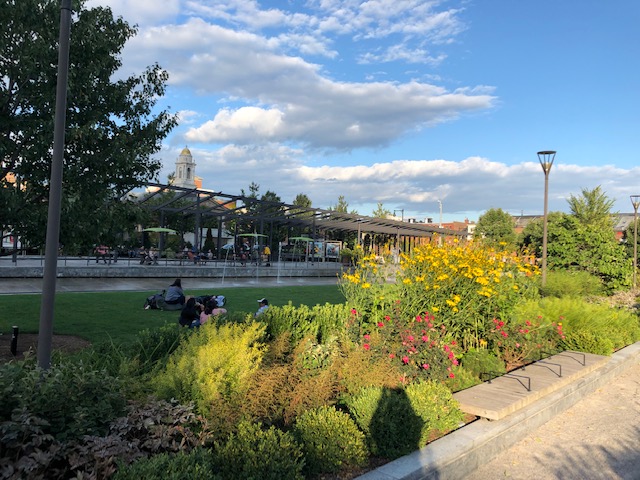 Closeup of the Greenway near the North End.

They said we were crazy,  and we’re still paying for this, but the Rose Kennedy Greenway and Spectacle Island are totally worth it.

You can read all about the Harbor Islands, great and small, trashy and historic here.