You may recall my post featuring Blanche, who keeps me honest and told me to “Get back on the damn horse and ride.” Well, I’m still not ready to do that, not in a even semi-permanent sort of way, but I am thinking it would be nice to just, you know, chat up a decent guy once in a while. However, I’m long on thinking and prepping and short on action, so my first, hesitant step into this fresh hell was to go to Old Navy to look at cute dresses. Oh, I know, believe me, I’m the main reason Blanche drinks so much, and once I induced an eye roll in her that required medical attention.

But you have to understand, I’m not a girlie girl. I don’t wear makeup, I don’t own one of those bag things many women carry around their girlie stuff in, I prefer jeans and plain tee-shirts, and lean toward black chunky shoes because I get to have comfort disguised as cool (perhaps only disguised to me). I own work dresses but only because pants are too hot and I don’t have to wear hose. So, for the record, me skulking around Old Navy for a dress is a BIG DEAL. I admit I kind of got caught up in the girliness of it all, and bought not one, but two dresses. One is a little black number that I have absolutely no use for and no place to wear, but my understanding is that this is the bedrock of girlie shopping. It may play into my scheme to sit in a nice bar to chat up all the decent guys who would most certainly be drawn to the dress like squirrels to an acorn. (Oops, I just made Blanche choke on a beer nut). The second dress is cotton and is a long sundressy kind of thing, and I have so little experience with this, I don’t even know how to describe the style. Here’s a picture. 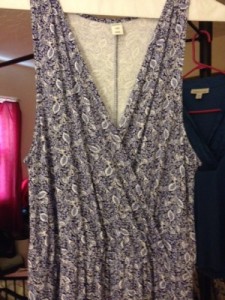 It’s sort of a crossover, wrap around, which I usually avoid because 1) when it wraps all the way on the bottom, the women I see wearing them are constantly having to hold on to the bottom lest they end up flashing the world and I’m much too lazy to do that, and 2) when I was younger, I didn’t have the boobage to carry something like that off. But this dress was only wrapped at the top and since having a kid, I’m almost average size, so I thought what the heck? It looked pretty darn cute, if I may say so myself, and so I bought both and had exactly three minutes of giddiness until I remembered, oh yeah, girlie is a harsh mistress: you can’t just buy a dress. The dress needs other stuff like a necklace and shoes, perhaps even a scarf and other things I don’t even know about. I mentally scanned my belongings and thought I could scrape up everything but the damn shoes. My choices were Merrell sandals and girlie sandals the wrong color from a dress and event long ago. Crap. Despite these reminders of why I’m not a girlie girl, I attacked the shoe store like a Navy SEAL. Sweating and gasping, I got a pair of black sandals, even though there is no black in the crossover dress. (Blanche is sighing and ordering another shot.)

With the summer dress burning a hole in my closet, I decided to kill three birds with one stone: celebrate city life and the end of summer, debut the dress, and practice being cute in public. I put on my costume, complete with the new sandals, a black chunky necklace and earrings I’d bought once for a fancy work dinner, a bracelet-watch, and rings. I gathered a small group of friends to meet me at an outdoor hotel bar in the afternoon, so we could enjoy the weather, sip cocktails, and look like those people in the outdoor furniture section of a Crate and Barrel catalogue. I was well into enjoying being a person who had no piles of laundry at home or a teenager to corral, chatting and laughing, when one of my friends pointed at me and asked,

I looked down to discover with horrifying certainty that my boobs were only big enough to hold the dress up while I was standing. Sitting on the Crate and Barrel couch, not so much. Despite being manhandled by my strapless bra, one boob was half popping out of the now slackened wrap around/crossover, which clearly is not the right name for this style because that dress was doing neither of those things.

We all laughed while I scooped up my dignity and my boob and then I spent the rest of the time checking and plucking the dress from the back and sitting on it so it wouldn’t gap. But that’s what dry runs and fun friends are for, right? Just as I was starting to feel cute again, in spite of having to sit ramrod straight to keep my dress in place, I glanced down and spied a small chain poking out of the side of my dress near my boob. Like a tawdry stripper/magician act in Vegas, I tugged on the chain and slowly pulled out my necklace from the side of my dress. Bless any of you who are blaming a broken clasp—I promise not to take my lukewarm mess to any public venues near you. No, I hadn’t actually caught the clasp in a link, just around the chain, so it slid up to the last larger link. There it sat precariously until my boob shenanigans had undone the thing. Ooooh, yeah, I’m a real catch.

We all had another round of belly laughs as I struggled to re-latch the necklace and keep my boobs covered. As I headed home, I had flashbacks of similar results in my attempts to be cool/cute/sexy in my 20s. It wasn’t pretty.

I should be asking myself the same thing. Well, to quote Blanche, I’m “getting back on the damn horse.”

“I’ll drink to that,” says Blanche as she takes a fortifying drag off her Marlboro. “But better make it a double.”