I was walking from work to the train the other day, and now that I think of it, the spot I’m about to describe is a spot where a number of things have happened to me that I have written about. I guess it’s like my blog Bermuda Triangle.

Anywho, here is the building I was near.

It houses a lot of state agencies, like unemployment and tax revenue, and lots of other offices I have had the privilege to not have to visit.

Just as I was walking by, one of the Boston Duck Tour Boats was driving by (it’s a WWII thing, look it up) and the tour guide intoned, “And on your right is an example of architecture called Brutalism, which was popular in the 1960s.”

We have a number of these buildings of gray, imposing concrete, including Boston City Hall, but I don’t know that I knew the name or I have forgotten it. Every few years there’s talk of tearing them down and putting up something, well, less brutal. But it never comes to anything. Regular people are on board, but the architects all come out of the concretework to praise it and say it’s been misunderstood then and now. Um, OK, but if it’s consistently being misunderstood, maybe it’s not the right style for, you know, a general public building, which should be welcoming to everyone and not be a test we have to puzzle over. We have enough trouble trying to remember our passwords and not having our identity stolen, so maybe we don’t have any extra energy to “get” big honking slabs of concrete put together at severe, sharp angles. Maybe it’s not our problem if we can’t understand it. Maybe it’s the ugly architecture’s job to make itself easier to know. Just a crazy layperson’s idea.

To be fair, I have sort of learned to love them because they are soooo ugly, how can you not?

But in the next breath the tour guide said, “And the specific style of these concrete columns are called corduroy.”

Now, I don’t know about you, but when I think of corduroy, I think of the bear in that children’s book, I think of comfy pants people make fun of, but still secretly love to wear, I think of pretty much 30% of my childhood winter wardrobe. Soft, warm, cozy.

So the two words “Brutalism” and “corduroy” stopped me cold and twisted my word brain around a bit, and I took a closer look at the concrete: 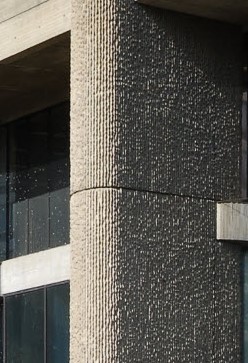 Yep, it kinda does look like corduroy. And just like that, I got a little cozier to these Brutal digs.