The weather finally cooperated enough that I could get out and explore my new neighborhood a bit more. A few weeks ago, I went for a long rambling walk in the Forest Hills Cemetery in the Jamaica Plain area of Boston. Established in 1848, it was conceived and designed as a cemetery and a public park, one of the first in Boston. To quote the brochure:

“Horticulture was an important scientific movement and economic driver in 19th century America, improving commercial agriculture, landscape design,and the quality of life. The Cemetary’s founder, Henry A. S. Dearborn, was one of the leaders of this movement and his design of Forest Hills … marked the culmination of his career.”

I don’t know why people of that era felt the need to use all their initials, but I do thank Henry for his work and vision. While the brochure has a detailed map and a self-guided walking tour of many of Boston’s leaders in government, art, medicine, activism, and entrepreneurship, I just felt like wandering wherever my interest took me. I have plenty of time to be more methodical later and see who’s who. This first trip out in spring, was about feasting my eyes, ears and nose on the green trees and plants, the art work, and the art-inspired headstones.

One of the first things I was drawn to was this unusual spherical stone:

I’ve never seen that in a tradition cemetery. Not that I spend a lot of time with them, but you know how you look over as you’re walking or driving by one and remember to be thankful you’re still on this side of the sod. Yeah, never saw a round stone. It’s such a cool design, and there were family names printed around, so it’s also very efficient. This one belonged to the Sawyers. I know that old grave designs are highly symbolic, and it took me a while to find what the sphere might mean, one website said the circle usually represents the unending circle of life and eternity. I like that. Maybe I’ll take an official tour and ask.

In the meantime, just like when you learn a new word and start seeing it everywhere, my eye started to find other spheres, perched precariously, on these bases, and yet still so soothing to look at — wishing your clan peace, Kendigs: 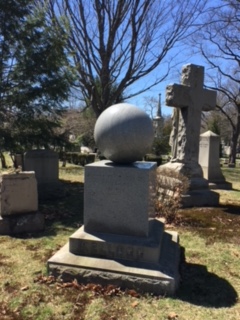 Or more solidly anchored into eternity — peace to you Connors:

And after walking among the sea of primarily English, Irish, and Western European names, this was a beautiful stone to come upon — diversity ha! Not just the name, but a colorful stone and beautiful Chinese writing: 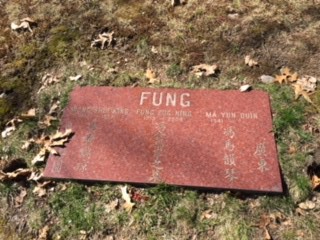 Since those who have passed on can’t speak for themselves, and I don’t want to make assumptions about any of them, I will give the last word to this little fellow, who like me was just hanging out and enjoying a beautiful sunny day in a quiet peaceful place.