I’ve missed posting for a couple of weeks, and I fell into the trap of wanting to write a really good post to make up for it, or at least something that makes sense. Between work and life stuff, I’m a little low on the “really good post” tank, and I admit the 45 nonsense has been wearing me down. My good friend and talented blogger at the Creative Part-Timer  put it perfectly: It never ends with that rotting orange peel for a minute. A better time ain’t coming, so I decided something is better than nothing, at least for me. I hope for you too.

So here are some random snippets of my scattered brain:

I saw this scene during the summer after work, walking from the train to my car. A perfectly human moment. Not a Muslim, Christian, Black, Brown, White, or Purple moment. A human moment of a mother and daughter picking flowers together. 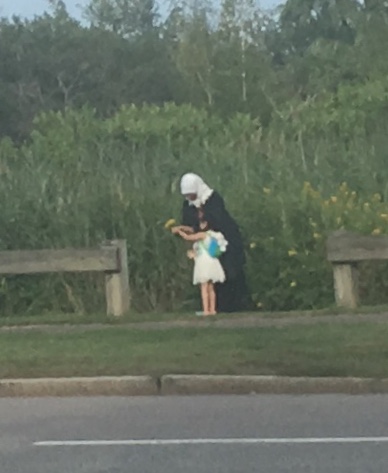 I’ve heard that emphasis on being human (as opposed to its many subcategories) a few times in the past several weeks, and it’s starting to resonate. One was a conversation between Deepak Chopra and Eckhart Tolle. They were talking about how to deal with all the polarization. Deepak was pretty human, admitting he does a lot of social media and gets caught up in emotion of it. He talked about even a post saying “It would be great if we could all live in peace” gets you haters. That was actually kind of comforting — even Deepak is struggling! Eckhart was more removed, but still practical and helpful. He talked about how your identity is separate from your viewpoints and perspective. If it’s not, then it’s your ego having a big ole party and wanting to go into any situation swinging.

OK, that last part was me, not him, but if he weren’t so organized and German, he might have said it. Don’t confuse who you are with your perspective. If you can do that, then you can create some space between who you are at a deeper level and your viewpoint. And once you do that, rather than sputter and try to defend yourself, you can really just listen and recognize the space in another. Then you see them as a human, not a fill-in-the-blank subcategory. It’s a straightforward idea that will take me a while, maybe years, to fully digest, never mind practice. But I like that task better than fretting over the Rotten Orange Peel’s newest ego party starter.

I am such a light user of social media, it’s a wonder I find anything useful, but I recently I stumbled on this very interesting TED talk by Theo EJ Wilson,  a police brutality survivor. He is clear and pointed and adds touches of humor. The caption provocatively says, “A Black man goes under cover in the alt-right.” And yes, he does go undercover via the internet, but it’s what he uncovers there that is interesting. As part of going undercover as a white supremacist lurker, he learned to separate himself from his views and finds the space to listen (refer back to the above paragraph with Deepak and Eckhart).

As he engages with this group, he finds they tend to be “regular Joes,” and he starts to hear a common theme: They want to know why they are being hated for being who they can’t help be — white men. Despite everything else they say, Theo finds himself in the awkward position of understanding that feeling and is surprised by his “unexpected compassion.” Not enough to offer olive branches to people who would prefer he didn’t exist, but enough to understand how they got to where they are.

And that leads him to a few insights that resonated with me, and like Deepak’s and Eckhart’s simple statement about separating self and perspective, will take me some time to unpack.

This one is hard, but felt true to me: Part of the rise of the alt-right can be traced to “the left-wing’s wholesale demonization of everything white and male.” Then he jokes, “If you’re a pale-skinned, penis-haver, you’re in league with Satan. Can you believe some people find that offensive?” I would add “straight, white, male,” and I have done this demonization myself — condemning a whole group based on the bad behavior of a few.

He also talks about how text books are filled with Cliff Notes versions of our dark historical past, which “severely decontexualizes race and the anger associated with it.” I’m sure there are entire theses written about this, or should be.

These were two new thoughts to me that I feel called to spend more time with. If they seem like hogwash to you, please feel free to move on — I’m not really into debating ideas. Remember, I’m still sorting out how to separate myself from my viewpoints, and I’m trying figure out how to update my viewpoints. So I’m not even a JV debater at this point.

Lordy I need a nap. I often feel overwhelmed by all the things I feel I need to understand better in this new world of the Rotting Orange Peel, so this is my way of looking down that long, long road and taking a small step. Find a spot of beauty, learn something uncomfortable, take a nap.  Repeat. Sounds like a plan.